The Structure of Water Resources Development in Nigeria

Posted on November 10, 2012 by safedrinkingwaterdotcom

Publisher’s Note:  After meeting Michael Oluwabunmi on the Linkedin networking site, I invited him to share his knowledge of water resources development in his country. Michael (MNIWASA) is a member of Nigeria Water and Sanitation Association (NIWASA). He is also an Associate member of Society Of Exploration Geo-Physicists (SEG) Tulsa, Oklahoma.

It is said that water is life. The Federal Ministry Of Water Resources (FMWR) oversees and regulates all activities that are water related in Nigeria. This is done through the involvement of the several parastatals under the ministry. These parastatals are the River Basin Development Authorities (RBDA) and the FGN middle belt (Formerly EU-FGN middle belt) programme distributed throughout the 36 states in the country. There are three arms of the Government in Nigeria, namely, the Federal, State and Local governments, respectively.

Each state also has a ministry of water resources performing the state function under the FMWR. At the local Government levels in each state, there are departments, which coordinate and regulate all water activities, similar to the FMWR. The Federal Government, through FMWR, pump billions of dollars on yearly basis to execute water projects to make portable water available for Nigerians and other nationals residing in Nigeria. On their own part, the states and the local governments also pump millions of dollars into water projects at their respective levels. States also have agencies like Rural Water and Sanitation Agencies (RUWATSA) and state water boards, through which the states execute water projects. Execution of water projects is mainly done by contractors (professionals and experts in the water and engineering business).

There also exist Non-Governmental Organizations (NGO’S) like UNICEF, World Bank, African Development Bank, etc. that facilitate and support water projects in Nigeria. Mention must be made of well to do individuals who also make their own contributions by providing water projects to communities, towns and villages in the country through the drilling of boreholes and construction of water treatment plants.

The FMWR directly awards MEGA projects, i.e., projects that cost hundreds of millions. Other mini water projects are awarded through the federal parastatals to qualified contractors. Consultants (qualified engineers in the field) are also contracted by the government to supervise the projects from start to completion, commissioning and handing over.

Below are the lists of some of the River Basin Development Authorities in Nigeria: 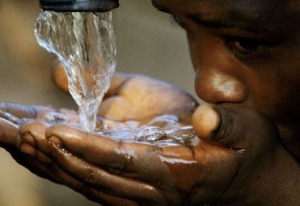 As hard as the Government tries to make portable water available for her citizens and other residents in the country, water availability still remains a headache in some parts of the country. One major reason for this is physical development in terms of opening up of new residential areas in different parts of the states. Therefore, it has become a tradition that in every home and even in industries, people make water from boreholes an alternative to water from the government. Thus, professionals in borehole drilling are successful and the industry is growing on a daily basis. Whenever a new house or industry is built, one or more boreholes must be drilled.

The structure of water resources in Nigeria will not be complete without making mention of the professional and umbrella body that regulates all water and environmental activities in the country. The name of the body is Nigeria Water and Sanitation Association (NIWASA).

McGuire is an environmental engineer and writer. He has worked in the drinking water community for over 40 yrs
View all posts by safedrinkingwaterdotcom →
This entry was posted in Information and tagged boreholes, drinking water, Nigeria, parastatals, public health, water, water resources. Bookmark the permalink.

5 Responses to The Structure of Water Resources Development in Nigeria