100 Years of Outlawing the Common Cup

Posted on October 29, 2012 by safedrinkingwaterdotcom 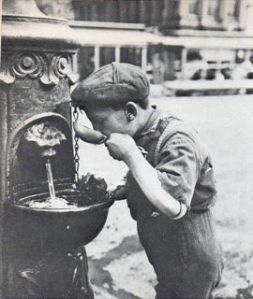 At the turn of the 20th century, public health professionals were still struggling to incorporate the precepts of the germ theory into all of their protocols. The general population was even further behind and, in many cases, resisted the momentum for change. One popular custom during this period was the use of a single cup or dipper for a pail of water or water cooler aboard trains—the common cup. Disease transmission as a result of using a common cup in public places was a serious problem far longer than imaginable. In 1902, the MIT professor and noted author William T. Sedgwick recognized the danger of the common drinking cup, cautioned against its use and noted that the public was not concerned, possibly due to the familiarity of its use.

“It not infrequently happens that the same persons who complain loudly and rightly enough, perhaps, of dirty streets, and are quick to blame public officials for their laxity in this respect will, nevertheless, at fountains, in railway trains or in theatres, apply their own lips to public drinking-cups which a few minutes before have been touched by the lips of strangers, possibly suffering from infectious diseases, such as tuberculosis or diphtheria.” (Sedgwick 1902)

Ten years later, the further spread of sanitary knowledge did not solve the continuing problem with the common cup. By 1912, the germ theory of disease was well established. Transmission of disease from one person to another was well understood. Isolation and quarantine were routinely practiced for those diseases transmitted from person to person. All the tools were in place to eliminate the problem of the common cup as a disease vector.

Apparently not. In a report from the New Jersey State Board of Health, it was noted that a state law prohibiting the use of a common cup aboard trains and boats had been passed prior to 1912. However, there was significant opposition to the law, because the operators of the trains and boats were not providing individual drinking cups (because they did not have to) and the public was unaware that they had to bring their own cups. The law had been attacked because no evidence had been presented proving disease transmission by the common cup and the regulation banning the common cup was an interference with individual rights—presumably New Jersey was interfering with the right of people to get sick. The following passage from the New Jersey report needs no explanation.

“One of the representatives of this Board [New Jersey State Health Board] while traveling on a railroad train noted that a family of children [was] afflicted with whooping-cough. As the children had spasmodic attacks, after each attack had passed they would go to the water cooler and take a drink from the glass which was used in common by all the passengers. After this had been repeated several times the inspector took occasion to go to the cooler, and holding the glass to the light found that it was smeared with the infected mucous from the mouths of these children.” (Board of Health, 1913)

Voices representing the railroad company interests added to this bizarre conversation in 1912.

“In 1912, an editorial in Railway and Locomotive Engineering lamented the passing of what it saw as a humane and democratic custom, complaining, ‘The cranks whose senseless agitation has eliminated the public drinking cup, even in the Pullman cars, have inflicted much discomfort upon ordinary people and have largely increased the business of saloon keepers.’” (Tomes 1998) 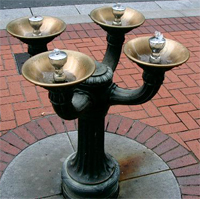 Sedgwick noted a “technological” solution to the common cup problem that we take for granted today. “A sanitary fountain has been devised, and is in use in many places, to do away with the public drinking-cup, and in so far as it is successful in doing this, it deserves the warm commendation of sanitarians…any one who wishes simply leans over and drinks from a little fountain [small jet of water] provided for the purpose.” (Sedgwick 1902) Bubblers are still in use today with, perhaps, the best known (and most beautiful) being the public water fountains in Portland, Oregon.

States got into the act with regulations on the use of the common cup (or common pail, for heaven’s sake) in schools. A series of articles on the blog safedrinkingwaterdotcom counting down to October 30, 2012, chronicled the efforts of Dr. Samuel J. Crumbine to ban the common cup in Kansas.

Aiding the migration away from the mucous-smeared common cup was the invention of the disposable paper cup in 1907 by Lawrence Luellen. The Dixie Cup was introduced about 1908 and was first called the “Health Kup.” In 1919, the cup was named after a line of dolls made by Alfred Schindler’s Dixie Doll Company. Simple advances in technology such as the paper cup can have big impacts on public health. As one wit stated recently on a Linkedin comment, “That was one small cup for a man….” (Cook 2012)

Sometimes these customary practices survive long after we think they are gone—especially in other countries. In the summer of 1982, I was riding on a bus in Leningrad (now St. Petersburg). I noticed lemonade vending machines along the sidewalks where for a few kopeks citizens could get a glass of refreshment. It was not until I looked more closely that I saw that everyone was using the same glass. After a person filled the glass with lemonade and drank from it, the obedient Soviet citizen would carefully put the glass on top of the machine for the next person to use.

Sedgwick, William T. Principles of Sanitary Science and the Public Health: With Special Reference to the Causation and Prevention of Infectious Diseases. New York:McMillan. 1902, p. 119-20.

McGuire is an environmental engineer and writer. He has worked in the drinking water community for over 50 yrs
View all posts by safedrinkingwaterdotcom →
This entry was posted in Information and tagged common cup, drinking water, public health, railroads, regulation, Samuel J. Crumbine, water, water history. Bookmark the permalink.

18 Responses to 100 Years of Outlawing the Common Cup

This Day in Water History