Posted on October 24, 2012 by safedrinkingwaterdotcom 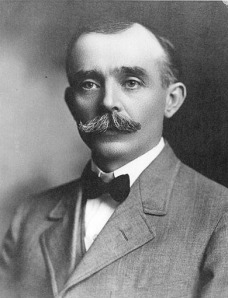 “Homes. schools, trains, and public buildings all provided common drinking cups as had been the tradition for centuries in Europe and America. This custom especially aroused Dr. Crumbine’s ire [Samuel J. Crumbine was a public health advocate and member of the Kansas State Board of Health]. At the annual conference of the state health officers in 1906, unsanitary conditions on railroads were discussed during which someone raised the question of the common drinking cup. The meeting adopted rules for sanitary cleaning of coaches but did nothing about the cup, while all agreed it presented a significant health hazard. The next year Crumbine boarded a train to investigate an outbreak of smallpox. It was a hot dry day. At the water tank he met “an emaciated, pale man” drinking from the cup. Going forward to the next car, he saw several “lungers” coughing and spitting on the floor and in the next one there were two people by the water tank, “a cadaverous looking man” drinking from the cup chained to the tank and a little girl waiting for her turn for a drink. The doctor discovered he was no longer thirsty.

October 23, 2012:  Common Cup Countdown-7 days to the 100th anniversary of 1st U.S. drinking water regulation. Here is a bit of doggerel from 1909 to pique your interest.

There are still a few,

And tear their hair,

And get into a stew,

Because they can’t sup

From the unwashed drinking cup.

For Kansans wash their knives and forks

Before they are used again.

And why not the cup?

About the inconvenience of not

Being allowed to swap

And filth and other things

With your fellow men,

Is a give-away when

McGuire is an environmental engineer and writer. He has worked in the drinking water community for over 40 yrs
View all posts by safedrinkingwaterdotcom →
This entry was posted in Information and tagged common cup, drinking water, railroads, regulation, Samuel J. Crumbine, water, water history. Bookmark the permalink.